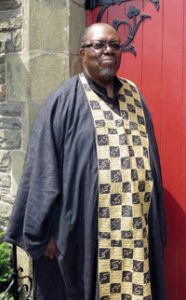 The Reverend J. Edward Lewis, Sr. is a native of Toledo, Ohio and was born into a religious family as the son of a Baptist minister. He took his primary and secondary education in the public schools of Toledo, his baccalaureate at Bowling Green State University and graduate work at Union Theological Seminary, where he received the Master of Divinity degree. He was further educated in clinical pastoral education where achieved the rank of Certified Supervisor in 1984, entitling him to teach clergy and others in the art and skill of pastoral care and counseling. He is a certified ACPE SUPERVISOR and Diplomate in the College of Pastoral Supervision and Psychotherapy (CPSP).

Reverend Lewis has served pastorates throughout the State of New York. Reverend Lewis served as Protestant Chaplain for the New York State Department of Corrections and Community Supervision (NYS DOCCS ) for sixteen years retiring, in 2016. During his service he developed the Inmate Hospice Aid Program and program curriculum for the Regional Medical Units in NYS DOCCS . In addition, he served two terms as President of the New York State Association of Protestant Chaplains. He has been a member of the Commission on Chaplains and continues to Chair the Down State Certification Committee for the New York State Council of Churches. Reverend Lewis is Pastor and Teaching Elder at the historic Calvary Presbyterian Church in Newburgh, New York with standing in the Hudson Mohawk region, the United Church of Christ and the Hudson River Presbytery, of the Presbyterian Church, USA. He is the cofounder of the Forgiveness and Reconciliation Project and founder of Mustard Seed Woodworks LLC—an organization for the continuing development of returning citizens, cultivating family and community values through sustainable work opportunities.

He has been a resident of Newburgh, New York for thirty years and is married to Dr. Cynthia McCollie Lewis, an Associate Professor of English at New Jersey City State University. They are the parents of two adult children and have five grandchildren.