The rare Ernest M. Skinner instrument, treasured by Calvary Presbyterian Church, was dedicated December 4, 1937 is in its original unaltered condition. It was described by its builder as being “Composed of a group of voices selected for their unusual musical character and their property of coordination to form a brilliant ensemble, Individually, they are distinctive and designed to beautify and enhance the musical service in the house of worship. There is no suggestion of the cheap or trivial in the entire group. Total beauty and the highest possible degree of musical character has been the single objective of its builders, as was expected of them by the officers and members of the church.”

The organ is encased in oak, its pipes being of burnished metal similar to those in the Washington Cathedral. It has a 32-foot pedal stop which no other organ in the area except that at West Point has, and its solo stops are also a feature. In all, there are 2,178 pipes, not including the harp and chimes. To see the entire stop list as it was its 2005, click here.  Uniquely fit into a loft at the rear of the Sanctuary, Mr. Skinner designed the organ so that the original stained glass loft window could be retained. The initial recital was performed by T. Tertious Noble, M.A., Mus. Doc., organist of St. Thomas, New York and nearly a thousand people experienced “a memorable day in the musical history of the community” when the great organ “spoke for itself!” as one newspaper reviewer proclaimed. 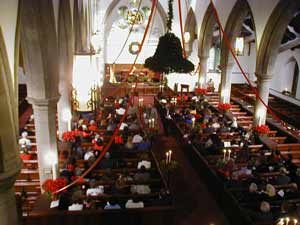 The organ, a gift of Mrs. Harriet Emigh Brown, widow of Judge Charles F. Brown, cost about $20,000 when installed (including the $250 fee paid the recital organist) and would require many times that to replace it today. Mrs. Brown had long dreamed of hearing such an organ in the church where she had sung in the choir as a girl. In tribute, the Rev. Dr. Imbrie said, “She has made it possible that we and our children’s children can make melody in their hearts unto the Lord … I thank God that (we) may still be led to Him by the Voice of Melody… that wood and wire and wind and fine workmanship (can) turn material things to spiritual songs.”

One of the charming anecdotes connected with Mr. Skinner and the purchase of the organ related that
because of the builder’s advanced age, the trustees had “second thoughts” and cancelled their original order. However, in the name of decency and fair play, Mr. Skinner insisted upon the opportunity to confront the church officers. After hearing their concern, the organ builder proceeded to walk across the board table on his hands! A binding contract was signed and the proud Mr. Skinner reveled in the praise lauded upon the instrument at its dedication.