Frederick Clarke Withers was the architect of this acclaimed religious structure build for the First Presbyterian Church which came to be know as Calvary Presbyterian Church when two congregations eventually re-united.  This 1858 building was Withers’ first commission to design an American church.  Here he created a landmark example of his personal principles and preferences in church architecture.  At the time there was debate about the appropriateness of classical “temple’ style buildings for Christian worship.  Withers asserted: “It seems to have been the prevailing ides that the ancient heathen temples are the best models for our churches, instead of which they are really the worst; for, in the first place, the portico, with its monotonous repetition of columns – copied perhaps from the Parthenon – made of wood and painted white, is inconvenient;  it neither affords protection front the sun, nor the pitiless blast of a winter storm; and in the next place, to reach the church it is necessary to climb some eight or ten steps, rendering it extremely difficult for the old and infirm (for whom it should be the first duty of the church to care) to ascent…Windows are long so that even on the darkest days…it would be almost impossible to sit in the church with any 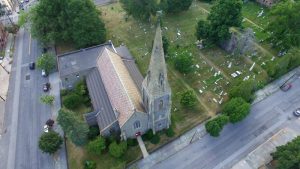 degree of comfort…(The steep medieval roof is) more adapted to the climate in shedding the rain and snow…”Gothic architecture is most suite for churches (and) has the advantage over every other in its application to all sites and requirement…and if properly built cannot fail to impart some feeling of respect and awe.”

Architect Withers so succeeded that when this edifice was completed, it’s perfect proportions, well-focused interior space, the multi-toned stone work and slate patterns earned critical acclaim in The Crayon, the era’s prestigious art journal.  Description of Withers’ correct Gothic church was meant to be a corrective critique of churches build before the “enlightened” Newburgh example.   The Ecclesiologist, which ignored American church architecture, said that while “the building was intended for the Presbyterian community … it is hoped that the ere long it may pass into other hands.” 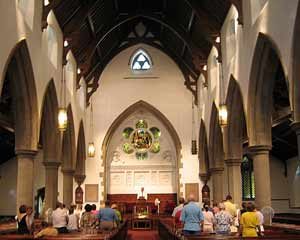 glass and stained-picture windows; Withers’ gift window with ornate “W” is in the south east corner.  Our gated-pews of yellow pine, rafter woodwork, wooded baptismal font and kneeler are all original.  The reredos was a memorial given in 1884.  The Christian Education Wing replaced the original hall and study in 1956.

Withers expressed a Pugin-Ruskin concept forcefully stating that “If we would that our works should live after us … we must work with TRUTH…”  thus he advocated honest materials, unconcealed masonry, nothing imitation or sham, for such “would only deceive man, for God it cannot deceive.”

Withers’  philosophy/theology of place, space and use have influenced the life and intention of this durable building and congregation who have withstood the changes of time and neighborhood proclaiming faith and permanence in an area of neglect and now revival.  Withers’ “heaven-pointed spire” and the prevailing wind vane point hope and directions through all times.

Calvary is located within historic Old Town Cemetery glebe-lands dating to pre-Revolutionary settlement of this area.  Considerable community restoration efforts have been made to preserve this important burying ground, particularly the one-of-a kind Robinson Mausoleum.  (Click here for more information on the Old Town Cemetery) Being 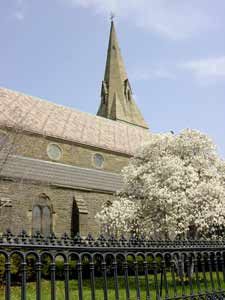 a trustee of the glebe, Calvary’s pastor and congregation are supportive and very involved in keeping up the preservation of this land.

Thomas Edison, personally persuaded reluctant Trustees to try electricity, making this the first electrified church in New York State.  However, we retained gas fixtures through the turn of the twentieth century “just in case!”

An organ was installed in 1860 and  was replaced by the current E. Skinner instrument, a gift, in 1937, well-used, well-tended, and well-loved. (See the section on our pipe organ)  The building’s acoustics compliment the church’s tradition of great music for worship, concerts and events.

Windows are by American Artists (see the section on our windows) and many are based on the Bible story illustrations of Hofmann, familiar to us from 1950 Sunday curriculum. especially the boy Jesus in the temple, the Good Shepherd, and calling the “Fishers of Men.”

Description of the Structure as originally built:

The building is in early geometrical style of Gothic art and composed of a nave with clerestory, north and south aisle, a tower and stone spire at the east end of the north aisle, and a porch on the south.  A lecture room and a minister’s room are provided at the west end of the building.  The walls are of blue stone lain in random courses, and gray stone dressings to the copings, windows, doorways, buttresses, water-tables.  The pews are of yellow pine and afford comfortable accommodations for 830 persons.  Dimensions of the internal building are:

making, with spire and cross, a total of 135 ft. from the ground.  The extreme length of the building, including lecture room is 1159 ft and is 85ft. wide, including porch.  The total cost of the building, with interior fittings complete, including land, iron fence, bell etc was $43,750.  The A. Geo. Jardine & Son  organ which was installed in September 1860 cost $3,000.