Hi everyone.  Because we have entered Phase 1 of the “return to normal” Belfor has been able to return to Calvary and resume the work they were prepared to start when the NYS PAUSE took effect.  I visited the church on Friday and the crew was hard at work on the dance floor, beginning the long process of cleaning every surface in the sanctuary.  (Hope they come to my house when they get done!)

The fire committee had our first face to face, mask to mask, meeting at Calvary on Friday with Geoff of Belfor to start discussion on how to we will recreate Fellowship hall.  He presented the plans that were complete by the architect that reflects how the building was before the fire.  Now discussion will proceed as to how we want to reimagine it for our future based on not only our history but how we envision our future. Much more on this in the future. 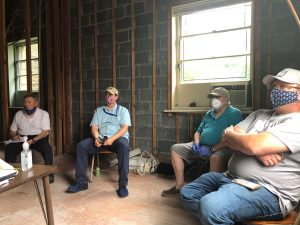 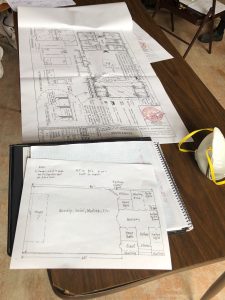 Also during the week American Eagle our electricians continued the work to rewire the old fuse box to the new circuit breaker box as well as work on the lighting in the ceiling, including starting to remove the chandeliers for cleaning and rewiring to include new LED fixtures. 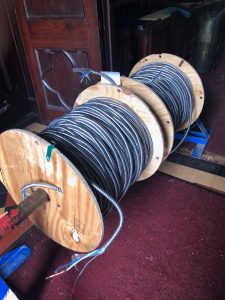 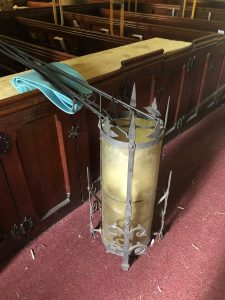 I have not before included any comments on the things going on in the country in these updates but I have to say something about the recent murder of George Floyd and the protests that have been a result of this atrocious  act.  The actions of the police officers in this were deplorable and they deserve the most severe punishment available.  I send out prayers for all of his family and friends who have to relive this horrible event every day, seeing it over and over in the media,  and will have to live with this for the rest of their lives.

I totally understand the need for people to release their anger, to make a statement and be heard and I completely support peaceful demonstrations if done is a safe way.  But will someone explain to me why looting and destruction is seen as an answer in anyway to this.  And this is taking place all over the country.  Yesterday there was a peaceful march that when down Liberty Street in front of my building and it brought tears to my eyes, seeing the support for Mr, Floyd and our black brothers and sisters and, I feel, encouraging the justice system to be just that just.  Now I have heard rumors that protestors are being bused to Newburgh.  This scares me.  Our local folks showed their concern and respect but I am really concerned that those bused in will not have the same intent.

Please pray with me for the family of George Floyd, for the justice system, for any that were and are affected by the looting and destruction and for our City of Newburgh that we are not dragged into the violence by those not from our area.

Now I will step down from my soap box and wish everyone a safe and healthy week.